Code red because of heavy snowfall? Many kitesurfer-heart starts to beat faster. Can we finally go snowkiting in our own country? This afternoon the time has come… In the whole country heavy snowfall and at some places even more than 20 centimeters. Time to throw all the gear in the car, let’s go snowkiting.

Snowkiting is nothing more that kitesurfing in the snow. The only thing you have to do is swap your kiteboard for a snowboard or a pair of skis.

10 centimeters of snow and wind

Tip: grab an old snowboard or skis. The chance that you hit the ground in the end is quite big (it’s still the Netherlands).

And of course a short aftermovie: 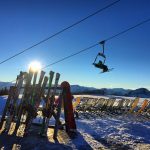 A long weekend Kirchberg in the winter? Go for it!